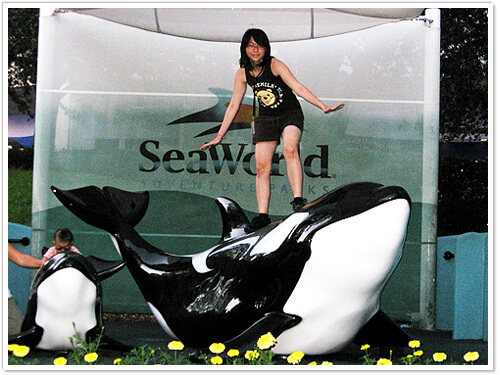 If I have to sum up the Work and Travel experience in one word, it’d be “awesome”. This applies to the whole experience, not only the travelling part of it.

After joining WAT USA, I’ve become much more independent. In the States, I was on my own. For the first time in my life, I had to learn to keep very strict accounts; to make sure that my pay stretched to cover my expenses. Even if I wanted to fall back financially on my parents, they were not readily available. I also had to deal with a lot of people issues. Though I stayed with one of my best friends, living together and just hanging out are two different things. Tempers flared and through our little arguments, we learnt a great deal more about each other. As a result of this developed understanding, we have become closer than ever. My other two housemates were not Singaporeans, so there was plenty of conflict due to cultural differences. We all had to learn to be patient and to understand other points of view (as a huge learning point, the Russians are very adamant about getting their own way). Despite our differences, we managed to iron everything out and eventually parted amicably.

I worked in Discovery Cove Photo as a sales clerk. Work was not physically strenuous but was extremely EQ challenging. What distinguishes my job from that of a typical Singaporean sales job is that we meet guests from all over the world who demand extremely high levels of customer service.

The cost per entry into Discovery Cove is USD300. Guests who pay this premium amount naturally would expect exceptional service. As in all service lines, there are bound to be guests who are very difficult. Although I am a very hot-tempered person, due to the demands of the job, I had to learn how to keep on smiling, even under high pressure. In my 3 months there, I received 7 good comments from guests, the highest number of good comments out of all the seasonal staff there. This indicates how much I’ve grown emotionally. Furthermore, even though I was only a temporary staff, Discovery Cove sent me for photography workshops and customer service workshops to learn new skills and hone my existing abilities.

I would like to say that all was sunny and great during work, but if it was, then I’d have learnt nothing of value. Instead, I will say that I had a little bit of a rough time at work. At some point I became embroiled in the internal politics simply because I was associated with a woman from the opposing side. Human issues like this had never occurred in my previous jobs and I’d say that this experience enlightened me to the dark side of human nature – the backstabbing that ensued from the competition and the selfishness of humankind. Trying to keep out of the politics took a toll on me. However, I was blessed with a really perceptive manager who noticed that I was a little unhappy. She took immediate action to investigate the entire situation and to put a stop to the petty arguments. In a sense, I felt like I was really taken care of and not brushed off just because I was a seasonal staff.

Despite problems at work, I miss a lot of things about my life in the USA. Most of all, I miss the chance to do things that I’ve never done before and to live life at its fullest. There were many “firsts” for me in the US. For the first time in my life, I baked cookies, brownies and cakes and they turned out delicious. I also got to see first-hand Europeans’ and Americans’ wild partying ways and it really opened my eyes.

The highlight of my trip came when my supervisors kindly arranged for my best friend and me to kiss and touch a dolphin (another first) during my guest visit to Discovery Cove. Not only that, I also got to swim with stingrays, feed very tame birds and swam next to sharks in the underwater. It was just breath-taking and fantastic.

Coordinating the different sight-seeing priorities different friends had was a headache. However, we managed to come to an agreement so when we eventually got to New York City and Los Angeles, the travelling part was greatly enjoyable. When I saw the Statue of Liberty with my very own eyes, I was totally awed. Watching the various landmarks on television is definitely nothing compared to being there, at the heart of the city.

I’d initially wanted to go to the Soka University of America to further my studies after junior college. Due to financial constraints, I was unable to actually enrol in the university. However, through WAT USA, I managed to fulfil my dream (and my mother’s dream) of visiting the university in Aliso Viejo, California. It was quite emotional for me as,before WAT USA, I thought I would never be able to visit it. But, my dream became reality.

An interesting question was posed to me. Someone asked me if I regretted spending a mini-fortune going there to be America’s cheap labour. I replied with a resounding “no”. These experiences can never be bought. I now have friends all over the world; from America, Thailand, Taiwan, Poland, Bulgaria and Russia. To visit the States as a tourist would not allow me to interact with such a wide variety of people from so many different countries. Furthermore, I have gained a deeper understanding of the Americans by immersing myself in their culture for the 3 months.

Another question someone asked me was if it’d be a better idea to spend the money to go for study exchange as we can benefit by clearing course credits during exchange. However, I would say that it is a very myopic view. A university is akin to a protected environment. Those who go to the university mostly come from the same middle-class to upper-class background. In my time in Discovery Cove, I have worked with all sorts of people. These include single mothers, retirees, poor people with more than 5 children, college and high school students. Interacting with them opened my eyes to the larger society and I don’t think a study exchange would fulfil that.