While I scroll through the countless pictures freshly taken from the USA, luggage still unpacked and sitting in the dining room next to my mother who’s cooking up a well-missed home cooked meal, curtains descend upon one of the best chapters of my life. It’s been three months after I left for the Work and Travel programme, I feel a sublime longing to be right there in those photos again. Don’t get me wrong, it’s not that I don’t miss home, but those months seem to be among the most noteworthy of my life. Filled with tales of friendship and adventure, I feel that I’ve gained treasures that would company me in my journey through life.

A year ago, during my travels as I walked along river Thames in central London, I chanced upon a college student working in a seemingly authentically English fish and chips store. His nametag wrote “ Ignacio, Ecuador.” I was curious and we started chatting. He told me that he’s on a Work and Travel Program, and that it’s a great way to see the world and meet people. I recall hearing about the programme in Singapore and the Speedwing organization, so I thought “why not?” That carefree thought was the platform for the beginning of the rich experiences I hold now. I was hungry for an adventure and yearning to escape the busy city life of Singapore and I ended up with a bounty of treasures more than I expected.

Morey’s Piers, the epitome of Fun, was where I chose to work. A friend of mine participated in the WAT program and worked there as well. When I asked how was it, he did a pretty bad job of giving me the precise details by merely saying “ it was great, man. I don’t know how to tell you this, but it’s more than great.” And there I was, equipped with that one-liner of knowledge, before selecting Morey’s Piers at the road show.

And he was right. It was more than great. For those who haven’t been there, picture this: An amusement park filled with fun-loving people, right on the white beaches, and as you turn to look at the Atlantic ocean, it looks like thousands of diamonds strewn across a blue blanket. This is a typical pin-up picture on the walls of many office cubicles, while I had the privilege of living it. It was an animated postcard that puts you looking forward to working everyday.

All that, and more!

I wanted a short taste of independence in another country and it completely fit my expectations. Wildwood is a place of picturesque beauty, with beautiful sunrise and you can jog along the boardwalk in the mornings, lazy afternoons at a nearby lake fishing, picnicking or Frisbee and volleyball on the pristine beaches with friends after a morning shift.

My job there was a lifeguard, and the lives of the patrons of the waterpark depended on my vigilance. Many people think being a lifeguard is just going to be boring, 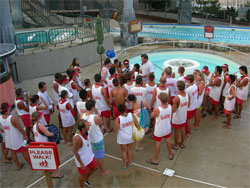 as the general idea is that the lifeguard sits on a chair and does nothing. However, for the 8 weeks I was there, I saved a total of 9 drowning guests. The adrenaline I felt when I jumped into the water was nothing like I ever felt. The satisfaction of carrying each guest safely out of the pool was immense, and I remember walking out of the waterpark everyday feeling a deep sense of accomplishment. That is also why I look forward to work everyday.

The Americans are fun loving, spontaneous people and it’s easy to pick up a conversation with anyone. It is a distinctively different culture the Americans have, and they take pride in their identity. I have heard much about the open culture from friends who’ve been there for student exchanges, but before I arrived, I was inclined to think that locals would be an exclusive group and would tend to stick among themselves. How wrong was I to think that way! I find myself privileged to be included in their activities. I was invited for their parties, basketball games, or home cookouts very frequently. Perhaps this culture is what made America a global leader in many aspects. This openness to people and foreign cultures is what created a prosperous melting pot of cultures.

In Morey’s Piers, there are as many international students as there are locals. It was a bonus for me to learn more about their culture. At work, we looked like an assembly from the United Nations! I shall take a moment now to talk about an entourage of people whom made my working time there so much better: my Bulgarian friends. The thousands of miles that separated where we grew up was negligible considering the huge amount of similarities we both have. We had similar outlooks towards life: “living for the moment and treasuring everything we’ve got”. Looking at them was like looking into a mirror reflecting a collective self. We shared countless laughter and joy. When it was time to bid farewell, it was inappropriate to cry, considering we were big boys, but when I left, I knew that we would always remember the period of time spent together and things we learnt from one another. This included Bulgarian food recipes, which, by the way, I judge to be among the best foods in the world.

Every semester of schoolin Singaporeespecially when the heat of the examinations approach, it’s common to see,especially on Facebook updates, people complaining that they need to have a“getaway”, a holiday or they’ll simply burst. Admittedly, I’m one of them. Theprogramme gave me just what I needed as it allowed me to travel for about 3weeks after I left Morey’s Piers. I decided to make the most of my air ticketby renting a car with my friends to travel as much of the US east coastas possible. On our first day I met up with my 3 other friends from GrandCanyon also in the WAT programme , at Baltimore Washington International Airportafter they took a flight over. We headed for a local’s house where we wouldspend the night. This was made possible because of the internationalCouch-Surfing community of people, who would host travelers in their homes freeof charge. Thus, we set our GPS to the address and drove there, eager to meetour hosts. It was rather unexpected that as we drove deeper into the suburbs ofBaltimore, wewent into a neighbourhood that seemed rather shady. It is a fact that Americanneighborhoods were inclined to be racially segregated and when we reached ourhost’s place in the evening, there were African Americans around the place,smoking, chatting on their porches, and holding wrenches fixing their cars. Wewere feeling a little uncomfortable and it didn’t help that Hollywood portrays them to be violent intheir movies. When we pulled over in front of our host’s house, which,interestingly enough, were Anglo-Americans, I never felt more welcomed in aneighbourhood. Neighbors smiled and greeted us good day, and we exchangedfriendly introductions. Our hosts told us that the suburb had low-crime and wasrelatively safe, and that put our minds to ease.

Staying in Wildwoodin a boarding house was different from staying in a local’s house. Our hosts, arecently married couple, gave us more insight into the American way of life andculture. They were kind enough to cook for us, and we had a very good dinnerand conversation at their place. Couch Surfing was certainly an experience oneshould get when travelling to another land.

We went down south to Washington, D.C, where nations capital awedus with its amazing architecture and history. To stand at the very same placewhere Martin Luther King gave his “ I have a dream” speech was indeed a veryinspiring moment for me. Walking past the façade of the white house and lookingat the very place where decisions that had a global impact was made wascertainly very memorable.

We drove to many places. all in all, 8 states in the USA: Pennsylvannia, New jersey, New York, Massachusetts, Virginia, North Carolina, D.C, and Maryland. We even drove up to Canada, visiting Toronto, Montreal, Quebec City and Ottawa,It would take more than this essay to describe every place in detail. I will just take the time and my best to write down a picture of a place that left the deepest memory in my mind: Boston Growing up, I’ve watch shows like “Boston Legal” and “Cheers”. It was a place I had always wanted to visit. I could go on about the city skylines and architecture, the streets and familiar places I’ve seen on TV which were definitely beautiful, but If I continued writing this way, wouldn’t I be the same as any other tourist in there? There’s a reason why it left a deep impression on my mind.NextStop, Virginia Beach.We went there for the sole purpose of a John Mayer concert. That was the firstconcert of my life, coupled with the fact that I listened to his songs most ofthe time when I was studying, made that experience of seeing him on stage trulymagical. I still remember the feeling of being immersed in the American crowd,seemingly integrated into the USsociety. USAis a land of extensive influences that transgresses globally, music and mediabeing one of them. This and more, is just part of the multitude of reasons thatamazed me.

And that was just because of one man.

Earlier on, I wrote about race being a rather sensitive issue in the USA. Influenced by many people who advised me on travel safety, I went there with a certain ??degree of stereotype, such as trying to avoid black neighborhoods and what not. Until one day, in the streets of Boston city, I saw an African American male, grey-haired, in tattered and ripped pants, dirty clothes and a dingy hat basking with a guitar. He played some really impressive tunes, and I gave him a dollar for that. Most other commuters dressed in suits and carrying briefcases talking on their blackberries, never stopped.

About an hour later, I walked back the same path, and saw the man picking up his tin can and guitar, leaving the spot. We walked the same way for roughly ten minutes. Then, he did something that surprised me. He walked into a Salvation Army office and poured all the money he had in his tin can into their donation box. As he walked away and I saw the figure of that man drift further down the streets then, become lost in the crowd, I can’t help but just freeze and stare, my mind reflecting on what just happened. 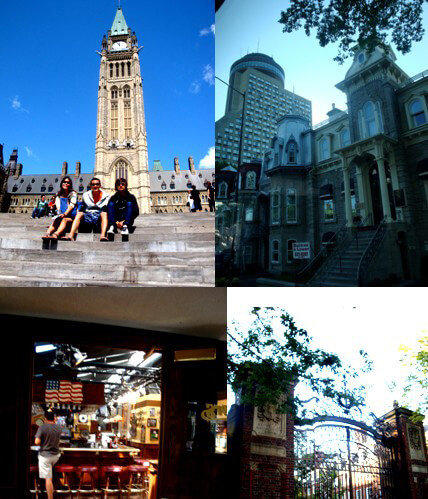 Clockwise: OttawaCanada, Streets of Quebec, “Cheers”?set Pub, Doors of the University of Harvard What I learned from him, who appeared toany other as a random beggar, was that we are all tied down to societal normsand stereotypes. Breaking free from it would allow us deeper sight into life.It would be hard for me to forget him.

In closing, the three months that I spentin the USwas one of the best I’ve had in my life. It was enriching, eye opening, andunforgettable. The WAT programme has exposed me to the different workingcultures of the world, and I feel more confident to step up to the globalstage. If you’re reading my essay now and still deciding whether or not to jointhe programme, why don’t you say “why not?” just like me a year ago, and writeyour journey that uses a pen with the ink from your heart?